From toddler to temptress

Newly discovered photographs show the making of an American idol: how Norma Jeane Baker grew up to become Marilyn Monroe
August 18, 2007
From The Sunday Times
By Mark Edwards

Poor little Norma Jeane - a lost little girl, unloved, unwanted, abandoned by a crazy mother, dumped on foster parents. Was it any wonder she grew up into the troubled woman we know as Marilyn Monroe? Actually, yes. As these rare images show, the reality of Marilyn’s early life was far sunnier than we have been led to believe. Far from being neglected, she was well looked after. As her foster mother said later, “We treated her like our own child because we loved her.”

The young Norma Jeane Baker showed few signs of the dazzling beauty that eventually made her one of the 20th century’s most talked-about women. As these previously unpublished photographs show, she was an ordinary Californian girl who went to the beach, played with animals, married young and got herself a job at a factory. But she had extraordinary ambition. And then Hollywood got hold of her.

The Monroe we know was moulded, manufactured and processed by the Hollywood studios. The cinema tycoons even made a claim on her past: it was important, from a marketing perspective, that the sex siren be portrayed as an impoverished urchin. Marilyn was a red-hot Cinderella, plucked from a near-destitute childhood. The truth is actually more prosaic.

Norma Jeane Mortenson was born on June 1, 1926. Her father played no part in her life – some believe him to be Charles Stanley Gifford, one of the bosses at Consolidated Film Industries who had an affair with her mother, Gladys – and she took her surname from her mother’s husband, Martin Edward Mortensen (her mother changed Mortensen to Mortenson on her birth certificate). Gladys left Mortensen in 1925 and Marilyn was fostered out to the Bolender family, who lived in the blue-collar LA suburb of Hawthorne.

Contrary to the stories later put out by the Hollywood machine, Norma Jeane enjoyed a close relationship with both her mother and her foster parents; as these pictures show, her childhood was full of happy moments playing on the beach and in the fields.

Gladys, meanwhile, worked in Hollywood as a film cutter, and the attendant razzmatazz filtered down into their otherwise ordinary lives. At the Hollywood Bowl Easter Sunrise Service in 1932, Norma Jeane and dozens of her classmates formed a choir dressed in black and then white robes – pure showbiz. Yet not all was glossy contentment.

In 1933, Gladys arrived at the Bolenders to reclaim her daughter. Norma Jeane hid in a cupboard with the Bolender children, but Gladys insisted they should move in together. Financially, things were looking up – she presented her daughter with a white baby grand piano that Norma Jeane/Marilyn was to treasure for the rest of her life.

Within months, however, Norma Jeane’s world had shattered. Already troubled by the suicide of her grandfather, Gladys received another body blow when she learnt of her brother’s death from tuberculosis. The two events sent Norma Jeane’s mother over the edge; in her autobiography, My Story, Marilyn describes her mother being dragged off “screaming and laughing” to an asylum.

Her subsequent rootlessness became an imprimatur of much of Marilyn’s later life. She was moved from a succession of foster homes to an orphanage; not for the last time, she believed that marriage might offer at least a temporary escape from her unhappiness.

Her first marriage was to a local boy, James Dougherty. Norma Jeane was just 16, naive and unworldly. Neither was she housewife material – her cooking was catastrophic, and on one occasion Dougherty came home to find his wife trying to persuade a cow to come into the house so that it could get out of the rain.

The marriage soon foundered, as Norma Jeane made her first steps, initially into modelling and then on to Hollywood. The rest is well documented; the husbands, the lovers, the dependency, the squalid ending in Brentwood. Was she ever as happy as she seemed in those sun-kissed pictures from the 1920s and ’30s? 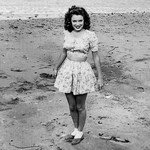 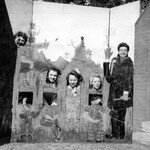