In February 24, 1953, Marilyn Monroe participates in the radio show "The Martin and Lewis Show" (an American TV show with Dean Martin and Jerry Lewis) where she plays in a sketch;
then, she receives the "Red Book Award", by 'Redbook' magazine, for the category "Best Young Box Office Personality" of the year 1952; Wade H. Nichols, the editor of the magazine, gives her the award.

> The Martin and Lewis Show 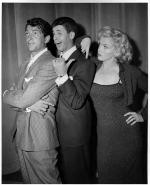 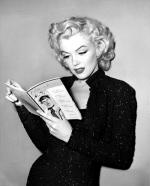 The Martin and Lewis Show
With Guest Star: Marilyn Monroe
The following transcript appeared in MARILYN: then & now Vol. 2 No. 5
On February 24th, 1953 Marilyn was awarded the Red Book magazine award for ‘Best Young Box Office Personality.’ The presentation was made at the end of Dean Martin and Jerry Lewis’s radio show. Not only did Marilyn accept her award, but she guest starred. What follows is a transcript of Monroe’s portion of the program. Martin opened the show by singing “You’d Be Surprised” in tribute to Monroe.

Martin: And now folks comes the real special part of our program. The happy time when we introduce our guest star. Course, tonight it’s especially happy because we have Marilyn Monroe, and, as I told you, Jerry doesn’t know about it. So it’s going to be a complete surprise. And . . . ah . . . Shhh . . . Here comes Jerry.

Lewis: You’d like to do her in oil? (laughter)

Lewis: The ugliest woman in the world!

Lewis: You got me so excited I put everything in the wrong place!

Martin: Well . . . This girl has everything in the right place. Jerry, every once in a while a meteor flashes through the skies and falls into the ocean. Fortunately for us, the ball of fire we have with us, as our guest, missed the ocean and landed at Twentieth Century-Fox. So, I give you the two most exciting words in the modern dictionary: Marilyn Monroe.

Monroe: Thanks Dean. That was a very flattering introduction.

Monroe: Oh, it’s nothing much just (laughter) . . . just something I threw on.

Monroe: Gee, thanks boys. Do you really think this gown does something for me?

Monroe: As a matter of fact, it’s just plain cotton.

Lewis: Cotton? I’ve seen more cotton at tope of a bottle of Aspirin.

Monroe: I better talk to the wardrobe mistress about this dress. It’s so tight I nearly wore myself out putting it on.

Martin: Poor girl, are you all in? (laughter)

Lewis: Gee, Ms. Monroe, Dean and I saw your last picture, Niagara. It was a “Dar:” A positive “Dar!”

Monroe: What was the audience reaction to the picture in the theater?

Martin: After your first scene, they served the Hershey bars in Dixie cups! (laughter)

Lewis: You better concentrate on the script.

Lewis: Oh! (laughter) We had a cocktail party at my house with a bar tender and everything, and we showed home movies of your picture, Ms. Monroe.

Monroe: Now, you’re not going to tell me that when I came on the screen that the ice in the drinks melted?

Lewis: Oh no! That would be silly (Jerry laughs). The bartender melted!

Martin: Kidding? Remember the scene where you were kissing your boyfriend?

Lewis: Right in the middle, my canary threw himself to the cat! (laughter) Ah, Ms. Monroe, if you go out with me after the show I’ll buy you a bottle of perfume . . .

Martin: You’re wasting your time, Jer. Marilyn would rather go out with somebody like me.

Monroe: That’s right. I’m a blonde, and I like to go out with tall, dark, handsome men. You see, opposites attract.

Lewis: Then you’ll love me. I’m just the opposite. (laughter)

Monroe: Look Jerry, you’re a man, and I’m a woman.

Martin: Won’t you give up, Jer. Marilyn prefers me. I’ve gone out with women that would not even look at you.

Lewis: So what? I’ve gone out with women who wouldn’t look at me either.
Monroe: Okay Jerry, supposing I do go out with you, what will we do?

Lewis: Well, we’ll get in my car and drive up Lookout Mountain, and when we get to the top . . .

Monroe: No Jerry, if I went out with you it might get into the newspaper, and you know how some newspapers will do anything for a story.

Martin: Well, we do about that type of newspaper, Marilyn, but we can paint a better picture if we dramatize it. So Wallington start dramatizing.

Announcer: The Chesterfield – buy them by the carton players – presents Dean Martin, Jerry Lewis, and Marilyn Monroe in a dramatic newspaper yarn. It’s the story of a cold-blooded newspaper editor who has no friends, but who is loved by Marilyn Monroe entitled . . . So Who Needs Friends?

Lewis (as Editor): Yello. This is the Morning Hangover. What? Just a minute. I’ll get the pressroom.

Martin (as printer): Hello. Pressroom. What is it chief?

Lewis: My mother just bought a new garbage pail, and she needs something to line it with.

Monroe: I’ve got a head line for ya, chief: Noted Doctor Advocates Fish Breeding for a Hobby.

Lewis: It’s too long. Cut it down.

Monroe: What will I say?

Lewis: Surgeon Urgin’ Sturgeon Mergin’. Come on baby, give us a kiss.

Martin (as publisher, opens door): Editor Lewis, I’m the publisher of this paper, and I’m not paying you to kiss our star reporter. Spending all your time kissing doesn’t increase our circulation.

Lewis: But it increases mine!

Monroe: I . . . I can explain Publisher Martin. I just came in to show him my wardrobe the I’m going to take along on my vacation. This is my hunting outfit.

Martin: I should have known better than to hire a woman reporter.

Monroe: Just a minute, sir. I’m a newspaperman. I’m not a woman.

Lewis: You’re not? I think we have a scoop.

Martin: Okay, but I hope we get adjoining lockers at the “Y”.

Lewis: You mean the gangster who was almost beaten to death last week with a bag of wet chicken livers?

Announcer: Yeah. Well, he was shot to death, and I found the slug.

Lewis: I know how Detroit Danny got knocked off. He was trying to blackmail Eskimo Eddie.

Monroe: Chief, if you print that story Eddie will kill you, and I’ll be alone.

Monroe: I don’t want you to get killed. I’m a woman. I want loving arms around me.

Lewis: Don’t worry. If I’m killed, somebody will come along tomorrow.

Monroe: Yeah, but what am I going to do tonight? (laughter) I don’t want you murdered. Give up your job, and I’ll marry you.

Lewis: What other work could I get?
Martin: Well, don’t worry about it, kid. You’re young. You can always live on love.

Lewis: Gosh! Kisses for breakfast, kisses for lunch, kisses for supper. Okay, it’s a deal, baby, but I’m warning ya’ . . .

Lewis: Don’t let me ever catch you having any meal.