Marilyn Monroe photographed by Milton H Greene, in April, 15, 1956, a sunday, day of the rest during the filming of "Bus Stop", in outdoor settings of 20th Century Fox in Los Angeles. Marilyn wears the "Bus Stop" blouse. 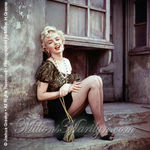 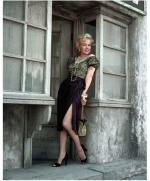 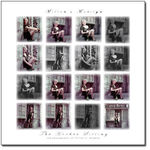 All photos are copyright and protected by their respective owners.
copyright text by GinieLand. ST. PETERSBURG — George Sweers was a risk taker who lived to tell the world about his adventures.

The former Associated Press and St. Petersburg Times photographer and editor ducked rocks and bullets in Japanese riots. He glided down the Mekong River in Vietnam with an American regiment. He buzzed military bases in Florida in a rented plane to see how closely they were being guarded.

No one seemed to notice the plane, and his photos embarrassed generals.

In a long and ground-breaking career, Mr. Sweers also aimed his lens at simmering East-West tensions along the Berlin Wall; anxious preparations at Guantanamo Naval Base during the Cuban Missile Crisis; and hundreds of Cuban citizens fleeing that country in 1965.

His peers acknowledged the superior work with numerous awards. In 1969, the National Press Photographers Association named Mr. Sweers its editor of the year.

But his greatest risks and accomplishments might have come within the walls of the Times, where Mr. Sweers helped incorporate regular color into the newspaper at a time when many in the industry thought that feat was impossible.

Mr. Sweers, a 33-year employee and director of news illustration for the Times, died Aug. 27 of multiple illnesses, including cancer. He was 82.

"George was an excellent photographer who also was able to manage photo staffs and develop a photo system that helped the St. Petersburg Times become a leader in the world of color in newspapers," said Hal Buell, the retired head of the Associated Press photo service.

Before he came to the Times in 1959, Mr. Sweers was the AP's photo editor for Asia. He liked a good party — and a good martini — at the Toyko press club.

In 1959, Donald Baldwin, a former AP colleague in Tokyo and then-managing editor of the Times, hired Mr. Sweers as a photo editor. It was more than a matter of playing traffic cop to a few photographers. The paper, led by editor Nelson Poynter, wanted to break out of black-and-white pages all day, every day.

"Life was in color. Television was in color," said former managing editor Mike Foley, who now teaches journalism at the University of Florida. "And so the paper should be in color."

But how? Decades before the digital revolution, it took skill, patience and time to get color onto a page.

"There were naysayers all around," said Jack Belich, a former Times editor. "There was resistance in the newsroom and on the production side."

The paper shelled out more than $1 million for new equipment, and the Times overtook the Milwaukee Journal and the Miami News as the standard setter for color photography and graphics in newspapers.

"We were the talk of the country," Belich said. "It literally took years for the other papers to catch up."

Because no one else was supplying the kind of color photographs he wanted for the Vietnam War, Mr. Sweers decided to go to Vietnam himself. He spent a year with the Army's 231st Transportation Company and filed lengthy dispatches about what he saw.

Back home, as director of news illustration, Mr. Sweers managed art and photography, reporting to Poynter and then to his successor, Eugene Patterson. During the Democratic and Republican national conventions in 1972, when Patterson ordered front-page color photos in the next day's paper, Mr. Sweers hopped on the back of a motorcycle, gripping the driver's waist as he zipped between traffic to a chartered plane at Miami International Airport.

He helped process and edit the film in a makeshift, in-flight darkroom, then returned to Miami Beach before dawn with hundreds of fresh newspapers for convention guests.

"He remained calm in the face of incredible news," Foley said.

Mr. Sweers was born and brought up in Kansas City, Kan. He got a job out of high school as a wire photo operator for the AP. He worked his way up to photographer and volunteered to cover the Korean War when it broke out in 1950.

His first marriage, to the former Ruth Bean, lasted 22 years and produced three children. Mr. Sweers had been married to his second wife, Marie, for 33 years.

Though his cancer caused concern, his sudden downturn and death took his family by surprise. The last day of his life, at Palms at Pasadena Hospital, Mr. Sweers announced, "I'll sure be glad to get out of here and get a martini."