On April 4, 1952, Marilyn Monroe participates in a party at the "Marine Corps Base Camp" of Pendleton in San Diego, "an outlying field" of the El Toro naval base. The Camp Pendleton in California is a training camp for the Marines. Marilyn is on stage to sing two songs: "Somebody Loves You" and "Do It Again", which nearly caused a riot in the male audience (nearly 10,000 Marines) by the suggestive lyrics of the song, when Marilyn invites a men in the public by singing: "Come and get it, you won't regret it".
On stage, she says: "You fellows down there are always whistling at sweater girls. Take away their sweaters and what have you got ?" And she describes the reaction of the crowd: "For some reason that seemed to kill them. How they screamed and yelled."
But causing almost hysteria is zipper of the Marilyn's dress which has busted (dress from designer Oleg Cassini). 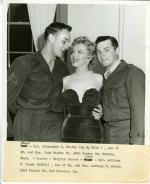 "I still remember the first time I heard the name Marilyn Monroe. It was the spring of 1951 and I had recently been stationed at the Camp Pendleton Marine Base about 100 miles south of Hollywood.
Returning from noon chow, I noticed a number of my buddies were clustered in a small group ogling a photo in the latest edition of Leatherneck Magazine.
Back then, the Marine Corps’ monthly publication ran a popular “pin-up” photo on the back cover of each issue. A different actress or model was featured each month. On that month’s cover was Marilyn Monroe, the new movie glamour girl, smiling coyly and attired in a somewhat-revealing swimsuit.
While I had no idea who she was, several of my more savvy buddies did. They had already seen her in a movie called “The Asphalt Jungle” and highly recommended that I catch it. I did and was pleasantly surprised at what I discovered.
A few months later, I would get to meet and chat with Monroe. It was a Sunday afternoon, and along with William Lundigan (a popular male film actor of the day, who had recently co-starred with her and June Haver in the comedy-drama “Love Nest”), Monroe was appearing at the Veterans Home and Medical Center in West Los Angeles.
There, she and Lundigan would entertain the hundreds of veterans who were the home’s permanent residents. They included aging and disabled men whose military service dated all the way back to the American Indian wars.
Since active-duty military were also invited to the affair, and I was in Hollywood on a weekend pass, I decided to attend.
Yet West Los Angeles was a fair distance from Hollywood, and like most of my military friends, I was low on cash, couldn’t afford to spend what little I had on public transportation and would have to get there by hitchhiking.
It was worth the effort. Monroe and Lundigan each spent about an hour mingling with the veterans and members of the military, posing for photos and signing autographs.
While Lundigan, who had been making films for more than a decade, was better known, the extremely enthusiastic all-male audience quickly made the pretty and curvaceous young Monroe their center of attention. A few whistled and egged her on and she responded with her famous smile.
In a brief conversation, she struck me as somewhat shy, yet extremely intelligent and personable.
While walking from the facility preparing to hitchhike back into Hollywood, I noticed two large sedans being pulled to the front entrance. Lundigan got into the first car, doing his own driving. Monroe got into the second, an apparently chauffeur-driven car.
With my thumb extended, as a sign that I was looking for a ride, I watched the first car approach and could clearly see Lundigan glance casually at me and nod as he continued by.
Slightly disappointed, my attention now turned to Monroe’s car, which was just leaving the entrance. Apparently reacting to my again-extended thumb, the driver seemed to be slowing down and pulling toward me.
Then, I heard the voice. “Hey, Marine.” It was Lundigan, himself a former World War II Marine. He had stopped and was now backing up. “C’mon. Get in.” He had reached over and had opened the passenger door and was offering me a ride into town.
Glancing back, I noticed that the second car had slowed almost to a complete stop, and the driver was smiling at me and shrugging as if to say: “I tried.” Monroe was clearly visible sitting alone in the back seat smiling, her hand poised in a slight wave.
While I appreciated Lundigan’s kindness, and had an interesting conversation with him during the 20-minute ride, I often wondered what it might have been like to spend that 20 minutes riding with Monroe.
What a story that would have been to relay to my pals back at camp.

Two years later, after a 12-month stint in Korea’s front lines, I was discharged from the military and returned home. I would be gone only a few weeks, when Monroe, on her first and only trip to entertain the troops in Korea, would show up in the area where my former unit was stationed. I had just missed out again.
I never did see Monroe after that afternoon at the Veterans Home, but I did enjoy many of her screen performances, especially in “O. Henry’s Full House” and “Some Like it Hot.” She would marry and divorce my childhood baseball hero, Joe DiMaggio, and playwright Arthur Miller, and have a controversial relationship with President John F. Kennedy.
By most contemporary standards, she would lead a sad and somewhat mysterious life.
On Aug. 5, 1962, Marilyn Monroe would be found dead of an apparent overdose of barbiturates in her home in the Brentwood section of Los Angeles. She was 36.
William Lundigan would continue to star in films and TV dramas for several more decades, and would end his career as a goodwill ambassador for Chrysler Motors. He would die in 1975 at age 61.
Today, if she were still alive, Marilyn Monroe would be 85 years old. Somehow, it’s difficult to imagine her at that age".

VIDEO - Marilyn Monroe The more I see you Then someone broke my heart in Little Rock
So I up and left the pieces there
Like a little lost lamb I roamed about
I came to New York and I found out
That men are the same way everywhere !

I'm just a little girl from Little Rock
A horse used to be my closest pal
Though I never did learn to read or write
I learned about love in the pale moonlight
And now I'm an educated gal !

I learned an awful lot in Little Rock
And here's some advice I'd like to share
Find a gentleman who's shy or bold
or short or tall, or young or old ..
As long as the guy's a millionaire !