Présentation de l'éditeur:  In 1955, Peter Mangone was 14 years old--a skinny boy from the Bronx with a Marilyn Monroe fixation, like so many teenagers of his generation. What distinguished Mangone was that he got to meet his idol. For several months, he had played truant from school to stake out the Gladstone Hotel on Manhattan's East 52nd Street, where the 29-year-old Monroe was staying after her unhappy divorce from Joe DiMaggio and her dismissal from the Twentieth-Century Fox studios. One morning, Mangone borrowed an eight-millimeter Kodak camera from his brother, headed down to the Gladstone and met Monroe as she was on her way out shopping with her friend Milton Greene. Mangone's dream came true: she waved, winked and invited him along. Over the course of the afternoon, he filmed her intermittently, without sound, later developing the film and viewing it at home. When Mangone left home, the footage went missing, and was thought to be lost--until 2002, when his brother found it among their father's possessions, virtually in mint condition. "It was like refinding my high school sweetheart," he said. "She was just the way I remembered her." This book of stills from Mangone's five-minute movie shows the great screen siren in wonderful moments of unguardedness, against the Chevys and Checker cabs of 1950s midtown Manhattan. The great charm of Mangone's images lies at the opposite end of familiar portraits by Cecil Beaton, Elliott Erwitt and co.: in his 14-year-old hands, through the grainy Kodak film, with its erratic lighting, Marilyn remains every inch the icon. Présentation de l'éditeur: This is a new release of the rare and very collectable first book entirely devoted to Marilyn Monroe. This edition includes all of the original text and photos. "The Marilyn Monroe Story. The Intimate Inside Story of Hollywood's Hottest Glamour Girl" was the first book written exclusively about Marilyn Monroe. It was originally published in 1953 by the Rudolph Field Company. It was published as a Hardcover with a color dust jacket and also as a Paperback. The original book was 63 pages with 39 gorgeous black and white photos of Marilyn Monroe. Présentation de l'éditeur: “We’re calling her Marilyn Monroe.” Those were the words 12-year-old Jane Lawrence remembered when she was asked to head the up-and-coming blonde starlet’s fan club at 20th Century Fox under the supervision of studio head Darryl Zanuck. Jane was no stranger to movie sets or movie stars, being that her father, Sidney Lipsitch, headed RKO’s legal department. She spent many Saturday afternoons at her home with the likes of Robert Mitchum, Lucille Ball, and Ethel Merman, but helping launch the career of one of the world’s most legendary sex symbols was a task beyond Jane’s wildest dreams. Nearly four decades later, author Tony Jerris was introduced to Jane through a mutual friend and learned how Jane’s working relationship with the actress developed into a special friendship that lasted right up until Marilyn’s untimely death on August 5th, 1962. Told in Jane’s voice, this is a story of an elderly woman reflecting upon her fondest memories of the blue-eyed screen goddess and how she became a confidante of sorts, who Marilyn used to call “My Little Secret.”

lot n°46001: A Marilyn Monroe Signed Black and White Photograph, Circa 1956
A Marilyn Monroe Signed Black and White Photograph, Circa 1956. An original print with a matte finish, depicting the star in one of her legendary glamour poses, her blue fountain pen ink inscription on the right side reads "To Roy, / Love & Kisses and - / thanks for keeping me / out of the clink! / Marilyn Monroe." (Please note there are slight creases in all four corners, especially the lower left one, plus a few minor chips to the surface, but the overall image and signature are not affected.) 14" x 11"
PROVENANCE: The "Roy" noted above was Beverly Hills police officer, Roy Garrett, who joined the force in 1946, and who had a habit of asking movie stars to send him an autographed photograph (which most did - see various lots throughout this auction). He evidently let Marilyn go without a ticket as he received this from her in the mail a few days later.
Sold: $31,250.00 Lot 46002: A Marilyn Monroe Signed Black and White Photograph, Circa 1955
A Marilyn Monroe Signed Black and White Photograph, Circa 1955. An original print with a matte finish, depicting the star in her most famous headshot, her white fountain pen ink inscription in the lower right corner reading "To Vern / It was a pleasure / to work with you / Love and Kisses / Marilyn Monroe;" "Vern" being Vernon Rickard, a bit player and "gofer" in the early days of Hollywood. (Please note there are many creases and wrinkles on lower margin that somewhat affect the autograph and there is a slight dent in the upper right corner.) 10" x 8"
Sold: $11,250.00 Lot 46003: A Marilyn Monroe Likely Final Signed Check, August 4, 1962
A Marilyn Monroe Likely Final Signed Check, August 4, 1962. From the star's personal checking account at City National Bank of Beverly Hills, check 281, penned in blue ballpoint ink (in another hand, possibly Eunice Murray's, MM's caretaker) reading "Aug 4 62 / Pilgrim / $228.80 / Two hundred twenty-eight and 80," signed in same ink in Marilyn's own hand "Marilyn Monroe," a red stamp on front reads "Paid / Aug 6 1962 / 901-1606," further stamps on back read in part "For Deposit Only / Pilgrim Modern Furniture" and "Santa Monica Bank.../ Aug 6 62;" included is a photocopy (not the original) of an invoice that Pilgrim's Furniture gave to MM (see below footnote). 3" x 6"
Coincidentally, two years ago, Heritage Auctions sold the original invoice that was given to Marilyn by this company [Pilgrim's Furniture then at 12217 Wilshire Boulevard in West Los Angeles] in Sale 7018, Lot 50225. That invoice was also dated August 4, 1962, so it appears that Pilgrim's made a delivery to MM's house and that she paid for her "Chest Roman white" on the spot with the above check from her personal checkbook. Interestingly, on that invoice, the evident delivery man wrote "Rec'd Check #281 in amount $228.80 / Payment in full / Earl Shero." At this point in time, this seems to be the last check Marilyn ever signed as she died that night, August 4, 1962. This check can be used to argue the point that Marilyn did not commit suicide -- would one be concerned with new furniture on the last day of one's life? Probably not!
Sold: $15,000.00 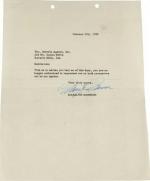 Lot 46007: A Marilyn Monroe Group of Mostly Never-Before-Seen Black and White Negatives, 1950.
A Marilyn Monroe Group of Mostly Never-Before-Seen Black and White Negatives, 1950. Thirty-three total, all originals, each depicting Marilyn at age 24 posing in a fancy backyard during one photo session; 14 show MM wearing a black turtleneck, white shorts, and black strappy sandals as she sits on a chaise lounge chair; 18 show MM wearing a light-colored bikini and same sandals as she poses by a swimming pool; and one shows MM wearing a dark-colored bikini by the same pool; two depict other people in the shot with MM, evidently the photographer's assistants. (Please note some of these negatives are somewhat dirtied and scratched, but they still print up beautifully and MM is quite clear and vibrant-looking in all the shots.)
Each Negative: 2 1/2" x 2 1/2"
These photographs of Monroe were taken on October 10, 1950 by Bob Beerman, a staff photographer at 'Modern Screen' magazine. A few of the images did appear in a 1951 issue of the magazine, though not all of them. Additionally, the current owner published seven of them online, but the majority of these photographs have never before been seen.
Sold: $11,875.00

Lot 46008: A Marilyn Monroe Pucci Blouse, Circa 1962
A Marilyn Monroe Pucci Blouse, Circa 1962. Made of hot pink silk jersey, boatneck, long sleeves, inside labels read "Emilio Pucci / Florence, Italy / 12" (though seeming to be a modern-day Size 6) and "Made in Italy Exclusively for / Saks Fifth Avenue;" included with a typed signed letter reading in part "This blouse by the Italian designer... / was given to me by Marilyn Monroe. It had become too / large for her. / Joan Greenson Aebi," "Joan" being the daughter of Dr. Ralph Greenson, MM's longtime psychiatrist. (Please note there are sweat marks and other minor staining evident due to age, but overall condition is still good.)
Sold: $12,500.00 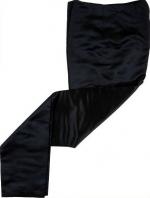 Lot 46010: A Marilyn Monroe-Received Letter from an Associate, Circa 1960
A Marilyn Monroe-Received Letter from an Associate, Circa 1960. Two pages, handwritten in blue ballpoint ink on 'American Airlines' in flight stationery, a general newsy letter with some highlights reading in part "darling Marilyn / ...I read Lillian Hellman's / new play and I saw Clifford's [Odets] / movie. I was shattered by the play... / I think Ralph Roberts would be of / great help to you. He is at Beverly / Wilshire.../ I do wish I had a script of 'Misfits;' interestingly, MM took the advice of this friend and ended up hiring Roberts to be her personal masseur. 10" x 7"
Sold: $750.00

Lot 46011: A Marilyn Monroe-Received Letter from Eunice Murray, 1962
A Marilyn Monroe-Received Letter from Eunice Murray, 1962. One page of lined notebook paper, handwritten on both sides in green ballpoint ink, dated "Monday nite / Feb. 5," outlining various ideas for home renovations that Murray was evidently researching for the star such as a "wardrobe dressing / room on the front of the house - using the front / window of (MM's) bedroom as the doorway," among others, Murray ends the note with "I would suggest / concentrating on the interior in the way we originally planned...E.M," additionally, two business cards of contractors are stapled to the front of note. 11" x 8 1/2"
Sold: $1,750.00 Lot 46014: A Marilyn Monroe Group of Documents, 1962
A Marilyn Monroe Group of Documents, 1962. Including: 1) six typed letters between Cherie Redmond [MM's Los Angeles secretary] and a travel agent, dated from February to April 1962, regarding an ongoing issue about a refund MM needed for unused airline tickets; 2) a pale yellow 'Inter-Office Correspondence' memo to MM from Redmond, dated "7/25/62," regarding funds in the star's various banking accounts; and 3) a similar memo, dated "8/1/62," regarding overdraft protection MM needed in order to pay August's bills. 11" x 8 1/2" and smaller
Sold: $1,062.50

Lot 46016: A Marilyn Monroe Legal Form, 1953
A Marilyn Monroe Legal Form, 1953. A pale yellow quadruplicate copy titled "Notice of Attachment," reading in part "Matter of Shaeffer [sic?] Plaintiff / Marilyn Monroe Defendant / on Monday, 2-2-53 12:01 PM;" two hole punch marks on top margin. 9" x 4"
This is an odd document, possibly relating to MM's voice and musical coach, Hal Schaeffer, though the last name is spelled differently on this form. Schaeffer, who was having an affair with MM as she was divorcing Joe DiMaggio, unwittingly became part of the infamous 'Wrong Door Raid,' but this piece pre-dates that event by almost two years -- perhaps it relates to a different person altogether.
Sold: $212.50