Marilyn Monroe at the Look awards party at the Beverly Hills Hotel, on June 3, 1952.
Marilyn wears one of the dress from the movie 'Let's make it legal'. 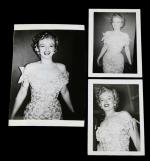 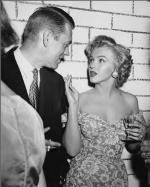 Marilyn Monroe in her room at the Beverly Carlton Hotel, 1951.
Photographies for Photoplay Magazine, by Phil Burchman. lot n°46001: Marilyn Monroe Early Signed Black and White Photograph,
Circa 1946.
An original print with a matte finish, depicting a young headshot of the twenty year-old before she looked like "Marilyn," signed in blue fountain pen ink on the lower right side "To Roy, / My favorite guard. / Always / Marilyn Monroe;" "Roy" being Roy Volker, a security guard at Twentieth Century Fox Studios throughout the 1940s-1950s; the inscription on this particular photograph is noteworthy because it appears to have been signed just as MM was changing her name -- it shows the childhood writing style of Norma Jeane Baker but is signed with her adult stage name of Marilyn Monroe. (Please note the inscription, especially the part reading "Marilyn Monroe," is now faded due to age and the photograph is somewhat yellowed and spotted.) 10" x 8
PROVENANCE: This piece was consigned directly to Heritage Auctions by Roy Volker's grandson.
Estimate: $8,000 - up.

lot n°46003: A Marilyn Monroe Group of Likely Never-Before-Seen Black and White Photographs, 1956.
Twenty-one total, all small as they were cut from contact sheets, all original prints with a matte finish, each depicting the star sitting in a restaurant called The Ram in Sun Valley, Idaho, during the filming of "Bus Stop" as actor Arthur O'Connell [her co-star who portrayed "Virgil Blessing"] is next to her in some shots (as are others), 13 images have a red handwritten check mark on them; from the files of Bob Beerman who took a number of photographs of MM throughout the years.
2 1/2" x 2 1/2"
Estimate: $4,000 - up.

lot n°46004: A Marilyn Monroe Group of Likely Never-Before-Seen Black and White Photographs, Circa 1951.
Ten total, all original prints with a glossy finish, each depicting the star in a black cocktail dress as she poses with different groups of men at a party (though one image does show MM with another woman and a man), all are numbered on the lower margins; MM was evidently the main attraction at this event which is believed to be the 1951 Hollywood Foreign Correspondents Association luncheon at Mocambo, the famous Sunset Strip nightclub.
4 1/2" x 4"
Estimate: $1 000 - up.

lot n°46005: A Marilyn Monroe Rare Headshot, Circa 1951.
An original print with a glossy finish, depicting a stunning image of the actress wearing elaborate rhinestone earrings and a necklace, with her black top "painted on" (on the negative before it was printed, likely to cover up cleavage), verso has handwritten annotations reading "Marilyn Monroe / 1951 / silhouette," an illegible credit stamp, and a credit sticker. (Please note this photograph is just in marginal condition with many creases and indent marks.) 9" x 7 1/2"
Estimate: $500 - up.

lot n°46006: A Marilyn Monroe Rare Black and White Cheesecake Photograph, Circa 1949.  An original print with a glossy finish, depicting the then starlet wearing a sweater, shorts, and high heels as she kneels on a miniature chair; verso has two FPG [Free Lance Photographers Guild, Inc.] stamps, a photographer's credit stamp reading "Rothschild / Photo / Los Angeles / DU. 7-2284," and some other penciled annotations; believed to have been taken at the Pacific Coast Antiques Show on May 25, 1949. (Please note there were slight specs on the negative when the photograph was developed and there are slight indent marks on the surface.)
9 1/2" x 7 1/2"
Estimate: $500 - up.

lot n°46007: A Marilyn Monroe Set of Rare Black and White Cheesecake Photographs, Circa 1948.Both original prints with a glossy finish, both depicting the then starlet wearing a white two-piece bathing suit, both with numbers on the lower margins. (Please note there is a very small dent on one but the image is not affected.) 5" x 4"
Estimate: $500 - up.

lot n°46008: A Marilyn Monroe Rare Black and White Photograph, 1952. An original print with a glossy finish, depicting a sweet image of the then newcomer wearing a formal dress as she smiles at Sidney Skolsky, the Hollywood gossip columnist who became her lifelong friend and protector; verso has an affixed typed snipe noting the two were "at the Look awards party at the Beverly Hills Hotel," the photographer's credit stamp reading "Hyman Fink," and a Photoplay Magazine Library stamp dated "Mar 6 1952." (Please note there are crease and indent marks on surface but overall image is not affected.) 9 1/2" x 7 3/4"
Estimate: $500 - up.

lot n°46009: A Marilyn Monroe Set of Rare Black and White Publicity Photographs, 1953.  Both original prints with a glossy finish, both depict the star in her room at the Beverly Carlton Hotel [still on Olympic Boulevard in Beverly Hills but now called The Avalon Hotel] doing household chores; the versos of both have the photographer's credit stamp of "Fink Smith," Photoplay Magazine stamps, Phil Burchman Agency stamps, and brief penciled annotations about the star. (Please note MM's face has been touched up in one image and there are very slight dent marks on both.) 9 1/2" x 7 1/2"
Estimate: $500 - up.

lot n°46010: A Marilyn Monroe Classic Black and White Headshot, 1952. An original print with a glossy finish, depicting one of the most famous headshots of the star as she wears a low-cut black and white dress (the same one she wore when she served as Grand Marshall of the 1952 Miss America beauty pageant in Atlantic City, New Jersey where it caused a scandal), bottom right corner displays filing numbers, verso has stamps reading "Marilyn Monroe / 20th Century-Fox Player" and "George Zeno / Collection" (a well-known MM photograph collector) plus another illegible one. (Please note there are some crease marks evident. 9 1/2" x 7 1/2"
Estimate: $500 - up.

lot n°46011: A Marilyn Monroe Rare Black and White Cheesecake Photograph, 1952. An original print with a glossy finish, depicting the then starlet in an elaborate bathing suit and platform sandals as she stands next to an oversized heart form; verso has stamps reading "Return to / Time Inc. / Feb. 11 1952 / File" and "MM File," an affixed typed snipe reading in part "Actress Marilyn Monroe, pin-up queen of the / armed forces, says 'Be My Valentine'...," and some brief penned annotations. (Please note there are some very minor surface dents.) 9" x 7"
Estimate: $500 - up.

lot n°46013: A Marilyn Monroe-Received Group of Professional Letters, 1957-1958.   Three total, all sent to the actress from colleagues in the industry including:
> 1) a two-page note typed on yellow paper, dated "July 30, 1957," sent to MM in "Amagansett, Long Island, New York," from Ray Stark [Hollywood producer], reading in part "It was good seeing you, if even so briefly, at / the East Hampton airport. /...We would love to do a project with you and also with / Arthur / ...such as doing 'Casablanca' / as a musical" (thankfully, MM didn't take him up on that offer);
> 2) a one-page note (the first page now missing) typed on white paper, dated "May 7, 1958," from Joe Wolhandler [MM's NYC press agent], reading in part "...the fittings, costuming, etc., we will try to do / without you;"
> and 3) a one-page note typed on white paper, no date, from Lionel Newman [Musical Director/Composer], reading in part "...I would like very much for / you and Arthur to have dinner with Beverly and me;"
> also included is a rare 1959 pamphlet titled 'Times Talk' with an article on page 3 noting how on September 29th "Marilyn Monroe paraded through the building inhaling culture, the guest of Sunday Editor Lester Markel." 11" x 8 1/2"
Estimate: $1 000 - up.

lot n°46150:  A Warner Bros. 'Key to the Studio,' Circa 1950s.  In the form of an oversized key, made of brass, designed with the famous 'WB' shield logo while one side reads "Welcome to Warner Bros. Studios" and the other "The Greatest in the World;" given to actors and other VIPs when they had an important association with the studio. (Please note this particular key is NOT Marilyn Monroe's key, though a similar one was given to her in 1956.) 10" x 4"
Estimate: $1 000 - up.