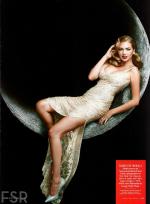 lot 1246: JOE DiMAGGIO CHASEN'S RESTAURANT INVOICE
A restaurant charges invoice issued to Joe DiMaggio from Chasen's restaurant in the amount of $53.20. The bill gives DiMaggio's address as the Hotel Knickerbocker. 6 by 2 3/4 inches
Estimate: $150 - 300

lot 1257: MARILYN MONROE MEDICAL FILE
A medical file pertaining to cosmetic surgery performed on Marilyn Monroe. The file includes facial X-rays and doctors' notes from the office of Dr. Michael Gurdin, M.D., and the X-ray office of Drs. Conti and Steinberg. Dr. Gurdin's chart on Monroe begins on July 14, 1958, and lists the patient as Marilyn Miller with addresses in New York and Los Angeles. The chief complaint listed is "chin deformity" and goes on to give a medical history that begins in 1950 and ends in 1962. Listed are a 1956 bout of neutropenia in England; 1957 ectopic pregnancy in New York; 1950 cartilage implant in chin that the doctor observed had slowly begun to dissolve. Those with knowledge of the implant procedure have explained that this was done in association with a tip rhinoplasty, a procedure involving the tip of Monroe's nose only, not the bones. The last entry is dated June 7, 1962, and reports a fall at between 2 and 3 a.m. resulting in swelling and tenderness of the nose. Monroe was brought to Dr. Gurdin by her psychoanalyst, Dr. Ralph Greenson. Monroe was referred to Drs. Conti and Steinberg for X-rays. For her visit to the radiologists she was given the alias "Miss Joan Newman," and that name appears on the paperwork with Monroe's Brentwood home address. Six X-rays appear in the folder: a frontal facial bones X-ray; a smaller X-ray that is a composite of the right and left sides of her nasal bones; and four small dental X-rays into the roof of Monroe's mouth, looking upwards toward the nasal bones. The conclusion, written by Dr. Conti and dated June 7, 1962, is that there was no damage to Monroe's nose due to her fall. A more recent evaluation of the X-rays indicates a very minute hairline fracture of this bone. Monroe had turned 36 less than a week earlier. On June 8, the following day, Monroe was fired from the film Something's Got To Give (20th Century Fox). Estimate: $20 000 - 30 000

lot 1260: MARILYN MONROE FUNERAL CARD
An original card from the funeral of Marilyn Monroe on Wednesday, August 8, 1962, at the Westwood Village Mortuary in Los Angeles. The front of the card bears an image of the Bok Singing Tower. The inside reads in part "In Memory of Marilyn Monroe" with the details of her funeral service and Psalm 23.
5 1/2 by 3 1/4 inches, folded
Estimate: $600 - 800

lot 1171: BETTY GRABLE HOW TO MARRY A MILLIONAIRE HAT
A violet silk faille hat worn by Betty Grable in How to Marry a Millionaire (20th Century, 1953). The hat has a bow to back, piping and artificial horsehair to interior. A bias label reads "1-39-1-4694 Betty Grable A703-47." Costume design by Travilla. Travilla received an Oscar nomination for outstanding achievement in Color Costume Design for his work on this film. Accompanied by a copy of the film.
Estimate: $300 - 500

lot 1262: MARILYN MONROE SNUFF BOTTLE
A snuff bottle of jade and coral owned by Marilyn Monroe. The bottle face is carved with an image of a bird in relief; the reverse is carved with four Chinese characters that read "fortune and longevity fill your doors." Affixed to a wooden stand.
3 by 1 3/4 inches
PROVENANCE Lot 370, "The Personal Property of Marilyn Monroe," Christie's, New York, Sale number 9216, October 27-28, 1999
Estimate: $1 000 - 2 000