Marilyn Monroe was already one of the most famous women in America when she posed for Eve Arnold, herself a pioneering photographer, at a Mt. Sinai playground and in a nearby marsh in 1955.  (Eve Arnold/Magnum Photos)

When Marilyn Monroe came out to Fire Island in 1955 to spend the weekend with Lee and Paula Strasberg, who were mentoring her at their famed Actors Studio in Manhattan, she famously remarked, “What a lovely place this is—it’s got water all around it.”

But that wasn’t her first time on Long Island. In 1949 Monroe had visited the Town of Oyster Bay’s Tobay Beach with Andre de Dienes, a photographer friend who’d once been her lover in California when she was still using her real name, Norma Jeane, and struggling to get her footing in Hollywood as a model.

Then she was a budding starlet and she’d come east to promote the Marx Brothers’ forgettable last film, Love Happy, in which she tells Groucho that she needs his help because “some men are following me” and he lasciviously replies, “Really. I can’t imagine why.”

In de Dienes’ pin-up photograph, Monroe was 23 and full of promise. Her troubled childhood in orphanages and foster homes were long behind her. A bright future lay still ahead. By the summer of 1955 Monroe had become one of the most famous women in America. Her marriage to Joe DiMaggio, the Yankee Clipper, was over, and she’d left Hollywood in a contract fight with 20th Century Fox. Her studio bosses had wanted her to do The Girl in Pink Tights. She balked and formed Marilyn Monroe Productions in New York.

The image of her skirt billowing in the breeze from the Lexington Avenue subway—a still from the 1954 movie The Seven Year Itch—had become “the shot seen ’round the world.” Adding to the attraction was her 1953 appearance as the nude centerfold in the first issue of Playboy magazine, because the enterprising publisher Hugh Hefner had paid $500 for the rights to Tom Kelley’s nude photos that he’d taken of her in 1949, paying her $50 to pose on a swath of crushed red velvet.

The news that the Hollywood star had been fully exposed broke in 1952 when Kelley’s photos turned up in a calendar illustration. Monroe showed her genius for self-publicity—and earned even more money for 20th Century Fox—by owning up to it. In answer to reporters’ breathless queries about what she’d been wearing during the shoot, she said she only had on “the radio.”

At the Strasberg’s place on Ocean Beach, Monroe was sharing a bedroom with their teenage daughter Susan, who was about to appear on Broadway in The Diary of Anne Frank. There were “a lot of theater people” at that part of the island, Susan Strasberg recalled. “They were sophisticates, which meant they stared at Marilyn Monroe from a distance instead of staring up close.”

Over the Labor Day weekend in 1955 Monroe was on the North Shore, staying at Norman and Hedda Rosten’s cottage in Port Jefferson. They were artistic college friends of Arthur Miller’s, who’d Monroe had been seeing since she moved to Manhattan even though they were both still married at the time. Late that September afternoon she left to do a photo shoot with famed photographer Eve Arnold, the second woman to join Magnum Photos, the world-renowned agency founded by Robert Capa and Henri Cartier-Bresson.

Arnold, who was then living in Miller Place, took Monroe to a playground in Mt. Sinai. Monroe brought along three bathing suits and a copy of James Joyce’s Ulysses, which she kept in her car.

“She said she loved the sound of it and would read it aloud to herself to try to make sense of it,” Arnold recalled, “but she found it hard going.”

Monroe had performed Molly Bloom’s sensual soliloquy to much acclaim at a small workshop at the Actors Studio. While Arnold was changing film, Monroe got the book out to read.

“So, of course, I photographed her,” Arnold explained. Soon it was 5 o’ clock, the golden hour, photographers say. “The timing for the marshes was just right,” Arnold wrote, “the light soft and shadowless and ranging from pale yellow through deep saffron.”

Monroe changed into a one-piece bathing suit with a leopard-skin print and waded in.

“She was intrepid,” Arnold enthused later. “She stood in [it], sat in it, lay in it until the light started to go and I called a halt. She climbed out, covered in mud, but she was exhilarated—and giggling.” Later, Arnold would insist that Monroe told her “she had loved the day and kept repeating that these were the best circumstances under which she had ever worked.” An effervescent Marilyn Monroe manages to get a laugh out of her serious husband, Arthur Miller,
in this series of candid black and white photographs taken in July 1956 when they were the most curious couple in the country. (AP Photo/Julien’s Auctions)

Monroe’s career was nearing its apogee. In the summer of 1957 Monroe was married to Miller, who’d won a 1949 Pulitzer for his tragic play Death of a Salesman. They were living in a weather-worn farmhouse in Amagansett near the Rostens, who were renting a cottage in Springs. Also nearby was the abstract expressionist painter Willem de Kooning, who painted Monroe for his series Women. The image, which Monroe biographer Lois Banner likened to “a cross between a grinning child and a screaming fury,” did not appeal to Monroe’s playwright husband but she didn’t mind. The married couple was in a hopeful phase: He was writing in his studio near the main house and she was cooking and tending her garden. And she was pregnant.

But on Aug. 1, 1957 she cried out in pain. An ambulance rushed her to Manhattan where Monroe hoped that her own doctor could save her baby. He could not. Suffering from a painful uterine condition called endometriosis, she had an ectopic pregnancy, and it had to be terminated. She spent 10 days in the hospital, Miller by her side.

The loss was devastating. When the season was over, they moved back to Manhattan, he ensconced himself in a book-lined study at one end of the apartment struggling over a screenplay that would eventually become The Misfits while she was at the other end, strumming a ukulele and crooning, “I Wanna Be Loved By You.”

The next year they moved to a new house they had built in Connecticut, but they never could recreate the idyllic summer they’d shared on the South Fork. And Monroe’s happy times on Long Island faded into memory. 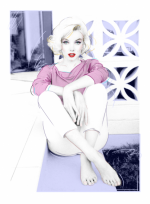 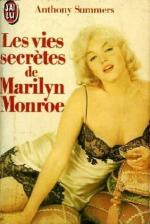 Description: Marilyn Monroe. Her rollar-coaster life. Her deception - shrouded death. Her divided secret life. Her legion of lovers. Her intimacies with JFK and Bobby Kennedy. Her mafia connections. This is the one book that tells the whole naked, deeply moving truth about the all - too-beautiful talented, and tormented woman who played a role in public and in private that was too much for flesh and spirit to survive. 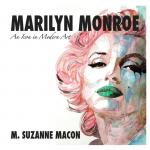 Description: Marilyn Monroe is perhaps the most recognizable figures in American history... She still lives on in history and our memories. This book contains a mere sampling of some of the ways Marilyn lives on through the eyes of each artist.