Lot 809: MARILYN MONROE OVERCOAT
A Marilyn Monroe fawn colored silk overcoat with black velvet collar detail and apricot satin lining. Seven-button closure and two exterior pockets. No size or maker’s label present. Fits size 8 dress form.
Monroe’s affection for this coat is documented by many photos of her wearing it during the years 1956-1959. Some have deemed it “Marilyn’s Favorite Coat.” As a newlywed, she modeled the coat in an iconic June 30, 1956, road trip and photoshoot with her new husband, playwright Arthur Miller, to his country home in Roxbury, Connecticut. Accompanying the couple in Miller’s black ’56 T-Bird was Marilyn Monroe Productions business associate and favored photographer, Milton Greene. Other extant photos include Monroe and Miller in June 26, 1959 as they departed New York’s Lennox Hill Hospital in New York City after Monroe's hospitalization for gynecological surgery.
This coat has been on continuous exhibit since 2010 at owner’s “Marshhaven” residence, Heritage Plantation, Pawleys Island, SC. The coat has been climate and UV protected.
LITERATURE
LIFE : Remembering Marilyn, 2009, pp. 105, 111.
Jenna Glatzer, The Marilyn Monroe Treasures, 2008, p. 142.
James Haspiel, Marilyn The Ultimate Look at the Legend, 1991, p. 133.
James Spada with George Zeno, Monroe: Her Life in Pictures, 1982, p. 116.
PROVENANCE Lot 162, "The Personal Property of Marilyn Monroe," Christie's, New York, Sale number 9216, October 27 & 28, 1999
Winning bid:$173,000 - Estimate: $80,000 - $120,000 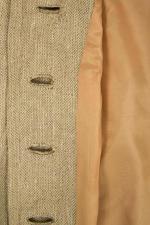 Lot 816A: MARILYN MONROE BLACK VELVET DRESS
A Marilyn Monroe black silk velvet dress believed to be the dress worn by Monroe to the 1956 Prince and the Showgirl press conference with Laurence Olivier at the Plaza hotel in New York.  The right strap of Monroe dress broke at that event and had to be secured with a safety pin.  There are obvious signs of repair on this strap.  Images showing Marilyn wearing this dress can be seen in lots 814 & 815 as well as the below footage of Marilyn live at the press conference event. Three-quarter-length with spaghetti straps and a zipper closure at back.   No sizes or maker labels present.
EXHIBITED Museum Salvatore Ferragamo, "Marilyn," Italy 2012-2013
PROVENANCE Partial Lot 219, "The Personal Property of Marilyn Monroe," Christie's, New York, Sale number 9216, October 27 & 28, 1999
Winning bid:$56,250 - Estimate: $40,000 - $60,000 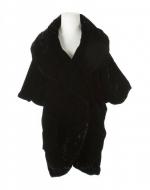 Lot 890: MARILYN MONROE GARTER BELT
A garter belt from Marilyn Monroe’s professional wardrobe. Beige lace nylon with interior labels that read “Saks Fifth Avenue” and “Nylon/ Do Not Iron.” Saks was one of Monroe’s favorite stores. Prior to its sale in 2005, this lot was intended to be sold in Christie’s 1999 Monroe Estate auction and still bears the Christie’s tags.
PROVENANCE Partial Lot 87, "Property from the Estate of Marilyn Monroe," Julien's Auctions, Los Angeles, June 4, 2005
Winning bid: $5,440 - Estimate: $4,000 - $6,000 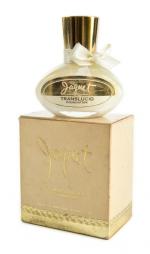 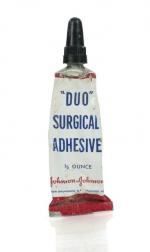 Lot 664: MARILYN MONROE SKI POLES AND TRANSPARENCY
Two sets of Marilyn Monroe owned vintage ski poles: one set made of wood and painted red, the other set made of bamboo and painted red at one time; most of the paint is now gone. The poles are similar to those used by Monroe in a 1945 photoshoot with Andre de Dienes. Accompanied by a transparency of Monroe from that photoshoot and a small clipping showing the same.
PROVENANCE From the Collection of Lois Banner
and Lot 267, "Property from the Estate of Marilyn Monroe," Julien's Auctions, Los Angeles, June 4, 2005
Largest, 41 inches
Winning bid:$3,750 - Estimate: $1,000 - $2,000 Lot 712: EARL MORAN (AMERICAN, 1893-1984) MARILYN MONROE NUDE
An oil on canvas painting of Marilyn Monroe reclining nude in bed. Signed middle right “Earl Moran.”
Earl Moran was a prominent pin-up artist during the 1930s and 1940s with a stylish flair that helped sell millions of calendars for publishers Brown & Bigelow. In 1946, Moran had the good fortune of meeting an aspiring model named Norma Jeane Dougherty, soon to become famous as Marilyn Monroe. Dozens of photographs were taken of Monroe in various poses, which Moran then used to paint seductive nudes in oil and pastel, portraying Monroe as a blonde, a redhead, and even as a brunette. The painting shown here was purchased by the consignor's wife directly from Moran after they met him at the Laguna Art Festival. The consignor fondly recalls how Moran explained to them that the model for the painting was a young woman named Norma Jeane Dougherty.
Canvas, 23 3/4 by 48 inches; 32 by 56 inches, framed
Winning bid:$37,500 - Estimate: $30,000 - $40,000

Lot 738: MARILYN MONROE CAST HAND AND FOOT PRINTS
An acrylic cast of Marilyn Monroe's hand and foot prints from Grauman's Chinese Theatre in Hollywood. Monroe originally immortalized her hand and foot prints at the theatre in June 1953. This cast, made of casting grade silicone, was part of a project from the late 1970s that was supposed to preserve the prints but also was going to be used to create a limited number of the molds for sale. That project never reached fruition, and this is the only known cast prepared this way. On one side the cast looks like the original; the back shows the cast in negative relief.
Approximately 40 by 36 inches
Winning bid: $23,040 - Estimate: $3,000 - $5,000 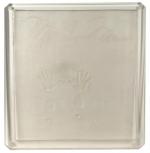 Lot 757: MARILYN MONROE CHEST X-RAY
An X-ray of Marilyn Monroe's chest. Printed on the X-ray is the following information: "Cedars of Lebanon Hospital/ Drs. E. Freedman and S. Finck/ Name DiMaggio, Marilyn/ No. 50612 Date 11-10-54/ Ref. By Dr. L. Krohn." As a radiology resident at Cedars, a young doctor obtained these X-rays. When he taught at the school himself, he used these X-rays to ensure that students were paying attention. Monroe was said to have known about the X-rays and their use, about which she said, "Isn't that sweet." Monroe's hospital visit was said to be for her chronic endometriosis, or as her doctor's described it, "For correction of a female disorder she has suffered for years." Monroe was in the hospital for several days and was filmed by the press when she left the hospital.
17 by 14 inches
Winning bid:$20,480 - Estimate: $1,000 - $2,000 Lot 959: MARILYN MONROE PRESCRIPTION BOTTLE
A Marilyn Monroe prescription pill bottle with a label that reads “No. 256653 Dr. Reuben/ Marilyn Monroe Miller/ One tablet in morning and at bedtime. 6.22.60/ Bedford Prescription Pharmacy.” Dr. Phillip Reuben was one of Monroe’s physicians. The consignor received the bottle from her Uncle who worked in the fabric and furniture industry in New York. The uncle was given the bottle by a colleague. One possibility is that the “colleague” was Henry Rosenfeld, New York clothing manufacturer and a close friend of Monroe's.
2 inches
Winning bid:$3,200 - Estimate: $1,000 - $2,000 Lot 980: MARILYN MONROE ASSORTED TABLEWARE
Marilyn Monroe tableware items including, a Carvel Hall cutlery fish service set of five forks and knives, the cutlery silverplated with faux ivory handles and marked EPNS, contained in a faux leather case; a helmet-shaped gravy boat stamped with a hallmark and “Sterling/ 646”; a silver-tone metal goblet with beaded rim and foot; a metal Thermos stamped “Made in Germany,” with hinged lid and mercury glass liner; a pair of table bells, each with clapper removed; a bronze bell with a cast putto handle and bell casting molded with figures (this item has been repaired); and a lace flounce cover topped with a light purple ribbon.
PROVENANCE Lot 413, "The Personal Property of Marilyn Monroe," Christie's, New York, Sale number 9216, October 27 & 28, 1999
Winning bid:$12,500 - Estimate: $3,000 - $5,000 Lot 988: MARILYN MONROE AVANT GARDE 2 MAGAZINE SIGNED BY BERT STERN
A Bert Stern twice-signed copy of Avant Garde 2 magazine containing the cover story "The Marilyn Monroe Trip: A Portfolio of Serigraphic Prints by Bert Stern" published in March 1968. The magazine was printed with 12 screenprints of Stern's modified photographs of Monroe. Printed on uncoated paper. Signed by Stern on the front cover at lower left and dated "2004." Additionally signed and dated on an interior page. Accompanied by two newspaper clippings of Stern's obituary. Stern died in 2013.
11 1/4 by 11 inches
Winning bid:$ 640 - Estimate: $600 - $800 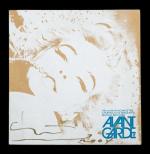 Lot 732: MARILYN MONROE 1955 "GOLDEN DREAMS" CALENDAR
A Marilyn Monroe "Golden Dreams" calendar from 1955. This vintage calendar was created after it was revealed that the model was Marilyn Monroe. Text to the right of Monroe's image reads "Posed by Marilyn Monroe." The infamous photograph was taken by Tom Kelley. Calendar pages are intact. Housed in a frame.
22 by 12 inches
Winning bid:$2,240 - Estimate: $600 - $800 Lot 734: MARILYN MONROE "GOLDEN DREAMS" SALES SAMPLES
A pair of sales samples of Marilyn Monroe “Golden Dreams” and “Lure of Lace” promotional images contained in an explanatory envelope. The images are promoted as “giveaway mounts” that can be printed with business information. The mounts are offered with the nude “Golden Dreams” image or the “Lure of Lace,” which is the "Golden Dreams" image “overprinted with lingerie finery.”
Largest, 14 by 11 inches
Winning bid:$1,600 - Estimate: $400 - $600 Lot 735: MARILYN MONROE RED VELVET SESSION PLAYING CARDS
A set of Marilyn Monroe playing cards featuring Tom Kelley’s Red Velvet photographs. Two unopened playing card decks with tax stamps, circa 1953. One deck shows Monroe in the pose titled “Golden Dreams,” the other deck is of Monroe in the pose titled “A New Wrinkle.” Contained in a presentation box stamped with an image of Monroe’s “A New Wrinkle” pose. A brief description is on the box's interior. Produced by Brown & Bigelow.
PROVENANCE From the Collection of Lois Banner
8 3/4 by 3 1/2 inches
Winning bid: $512 - Estimate: $100 - $200 Lot 736: MARILYN MONROE FIRST ISSUE OF PLAYBOY MAGAZINE
A copy of the first issue of Playboy Magazine that features Marilyn Monroe on the cover. Monroe also appears on the interior of the premiere issue in an article on pages 17-18 titled "What Makes Marilyn" and a color pin-up of Monroe taken by Tom Kelley during the 1949 Red Velvet session on page 19. Monroe is called "Sweetheart of the Month," which evolved to Playmate of the Month. No date appears on the cover because Hugh Hefner has stated that he didn't know if there would be a second issue. The magazine hit newsstands in December 1953 and sold for 50 cents.
11 by 8 1/2 inches
Winning bid: $15,625 - Estimate: $3,000 - $5,000 Lot 737: PLAYBOY 40TH ANNIVERSARY FENDER STRATOCASTER
A Playboy 40th Anniversary limited edition Custom Shop Fender Stratocaster. The guitar body is custom painted by Pamelina H. and features an image of Marilyn Monroe from the Red Velvet session that appeared in the first issue of Playboy magazine against a black background. Fender Custom Shop neckplate, backplate engraved “Playboy” with an image of the Playboy Bunny logo. Headstock bears the image of a Playboy Femlin, numbered on back of headstock “DE2-092 of 175." Playboy bunny logo inlays on flamed maple fingerboard. Accompanied by a certificate of authenticity from the Fender Custom Shop dated April 25, 1994; a red leather "Playboy” guitar strap; and a red leather gig bag that fits into an SKB flight case.
39 by 13 inches
Winning bid: $25,000 - Estimate: $3,000 - $5,000