Her new Lifetime TV mini series shows a more personal side of the icon and legend that is Marilyn Monroe.
And on Wednesday Kelli Garner showcased Marilyn's soft spot for little creatures as she filmed a touching scene in Toronto, Canada.

Kelli, 30, was spotted reenacting a real life anecdote from the biography The Secret Life Of Marilyn Monroe, where the Hollywood actress saved some pigeons from captivity in New York's Central Park. Kelli appeared demure during the outdoorsy scene, bundled up in a thick tan trench coat and blue head scarf.
She donned an all-black ensemble beneath her coat consisting of a blouse, loose-fitted trousers, and pumps.
Finishing off her look, The Aviator star sported dark brown leather gloves and black sunglasses, and of course wasn't without Marilyn's signature platinum locks and beauty mark. 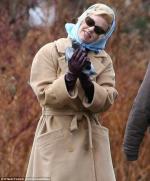 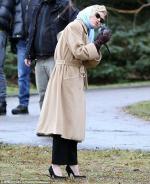 The four-hour project is based on J. Randy Taraborrelli's bestseller, The Secret Life Of Marilyn Monroe, and explores the late star's family life and how she succeeded in hiding from an all-too-invasive world.
And Wednesday's scene appeared to be based off a snippet of the book in which the author retells an anecdote by James Haspiel - taking place on a night Marilyn went for an evening walk while living on East 57th street in New York City. The buxom blonde stopped to watch a couple teenage boys use long netted poles to catch pigeons and put them in a cage. The young lads had said they planned on bringing the birds to the market, where they were worth 25 cents a piece.
'Well, if I sit on this bench and wait until you're done, and I pay you for the pigeons, will you then free them ?' Marilyn offered.
The boys obliged and the iconic star did indeed pay them, as promised, for each freed pigeon.

Kelli joins Susan Sarandon, who has been cast as Marilyn's mentally ill mother, Gladys.
The Hollywood icon was just 36 when she was found dead in the bedroom of her home in the upscale Los Angeles neighbourhood of Brentwood on August 5, 1962. The Some Like It Hot star's death was ruled as suicide due to barbiturate poisoning at the time.
But it has become one of the most hotly debated conspiracy theories with many believing Marilyn was murdered because of her links to President John F. Kennedy and his brother Robert. 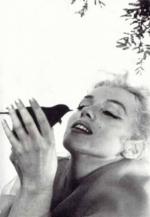 In October, Lifetime said of the series: 'Marilyn is both the personification of sex, whose first marriage ironically collapses because of her frigidity, and a fragile artist who seeks the approval and protection of men. 'But after tumultuous marriages with (baseball star) Joe DiMaggio and (playwright) Arthur Miller, she realizes she has the strength to stand on her own. She becomes the face and voice of an era, yet wants most of all to be someone's mother and someone's little girl. She's the Marilyn you haven't seen before, the artist who, by masking the truth with an image, gives her greatest performance.'

Kelli, who broke up with her Big Bang Theory boyfriend Johnny Galecki in August (they had been together for two years) joins a long list of actresses who have played the tragic film star on TV. These include Megan Hilty, Uma Thurman, Katharine McPhee, Charlotte Sullivan, Suzie Kennedy and Constance Forslund.