Lot 515 MARILYN MONROE NAME CHANGE MEMO
A Twentieth Century-Fox inter-office memo regarding Marilyn Monroe's name change from Norma Jeane Dougherty to her now famous professional name. The typed memo is dated December 9, 1946, and refers to the December 3, 1946, letter that first confirmed the change. This particular memo was intended for Mr. A. De Weese and is signed by George Wasson.
Winning bid:$8,960 - Estimate: $1,000 - $2,000

Lot 522 MARILYN MONROE SIGNED CHECK, 1953
A Marilyn Monroe handwritten and signed check from a Bank of America Los Angeles account, dated March 21, 1953, in the amount of $50.00 paid to Mr. John R. Tilley. The check is housed in a frame with an image of Monroe taken by Cecil Beaton, said to be her favorite photograph of herself.
unsold - Estimate: $4,000 - $6,000 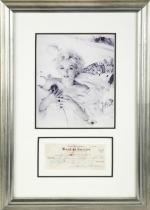 Lot 529 MARILYN MONROE SIGNED CONVERSION TO JUDAISM CERTIFICATE
Marilyn Monroe's certificate of conversion to Judaism. Signed by Monroe and dated July 1, 1956. Monroe converted to Judaism to marry playwright Arthur Miller. The couple had a traditional Jewish wedding on July 1, 1956. The certificate, signed by Miller and other witnesses, reads in part "Hear O Israel The Lord Our God/ The Lord is One/ Certificate of Conversion/ This is to record that Marilyn Monroe [signed]/ having sought to join the house of Israel by accepting/ the religion of Israel and promising to live by its principles/ and practices was received in the Jewish Faith/ on July 1, 1956/ corresponding to the Hebrew date 22nd Tammuz, 5716/ at Lewisboro, New York." Housed in a framed display with three black and white images of Monroe and Miller at their wedding and an informational plaque.
26 by 39 1/4 inches, framed
Winning bid:$70,400 - Estimate: $50,000 - $70,000 Lot 533  GARY COOPER LETTER TO MARILYN MONROE
A Gary Cooper typed, signed letter to Marilyn Monroe. The letter is written on Cooper’s personal stationery and dated June 22, 1960. The letter is addressed to “Miss Monroe” and reads in part, “The roses were beautiful and I can’t tell you how much I appreciate the trouble you went to. I just want to thank you with all my heart,” signed “Gary.”
Winning bid:$1,280 - Estimate: $800 - $1,200 Lot 536 MARILYN MONROE SIGNED SETTLEMENT
A Marilyn Monroe signed settlement contract between Monroe and Irving Stein following the departure of Stein from Marilyn Monroe Productions, Inc. The contract is dated February 19, 1959, and signed on the fourth page by Monroe, Stein, and their respective attorneys. The final page is cut down from its original size and now measures 7 1/2 by 8 inches. According to the settlement, Monroe agreed to pay Stein $33,000 to end their relationship and any ownership interests Stein once held in Marilyn Monroe Productions, Inc. Additional notes and initials within the document not believed to be in Monroe's hand.
unsold - Estimate: $6,000 - $8,000