When Marilyn met the Queen Description: In July 1956, Marilyn Monroe arrived in London, on honeymoon with her husband Arthur Miller, to make The Sleeping Prince (later released as The Prince and the Showgirl) with Laurence Olivier.
When the couple arrived at London Airport, they were looking forward to a peaceful stay. Marilyn would work during the day at Pinewood Studios, while Arthur would write. Then, in the evening, the couple would be able to relax together in their private English country cottage. It didn't quite turn out that way.
The 'cottage' was actually a mansion, which belonged to Lord Drogheda, the managing director of the Financial Times. Raised in tiny hotel rooms and apartments, Marilyn felt herself being watched. She was, by Lord Drogheda's servants, who were selling stories to the papers.
When filming began, it was a disaster. Director Joshua Logan had written to Olivier, offering advice on how to handle Marilyn as an actress, but Olivier ignored him. Instead, he condescended to her in his introduction to the cast, pooh-poohed her views on acting, and dismissed her stage-fright as an inconvenience. Marilyn grew to hate Olivier with a passion; the feeling was mutual.
Marilyn found herself torn between settling into married life, being a curiosity for the frequently hostile British press, and her work on The Prince and the Showgirl. She took solace in small acts of kindness from members of the public, and a new fascination with Queen Elizabeth.
Marilyn made a point of adopting some of the Queen's favourite brands, buying gloves from Cornelia James, perfume from Floris, and switching from Chanel No. 5 to Yardley's Lavender. Marilyn made a point of asking the film's PR manager to add a royal meeting to her schedule, but each day Olivier would delete the request.
Michelle Morgan describes Marilyn's trip to late-1950s' Britain in evocative detail, exploring the making of the film alongside the film star's troubled private life and her quest to meet the Queen.

Mimosa:
Memories of Marilyn
& the Making of "The Misfits"
Author: Ralph L Roberts Description: Ralph Roberts, actor, masseur, and former Pentagon liaison, could frequently be found in the kitchen of Lee Strasberg’s NYC apartment on Central Park West. One pleasant spring morning he by chance met Marilyn. Not the turned-on public persona of Marilyn Monroe he had crossed paths with in the past, but the honest, casual Marilyn who existed outside the public eye. Thus set in motion the beginnings of a deep friendship that forever changed Ralph, and unquestionably altered the course of his life. The next several years saw him in the Nevada desert with Montgomery Clift and Clark Gable, at the NYC apartment of Lester Markel, grilling at Frank Sinatra’s hilltop home, and on the phone with President Kennedy. Ralph saw Marilyn almost daily, and served as a sympathetic ear and a close friend. He was fiercely protective of his friend and her privacy. This book is a collection of Ralph’s recollections, and a rare and intimate view of Marilyn as the person she was when the cameras were off. Years after her untimely passing, fed up with the many falsehoods printed about his friend, and with the encouragement of Lee Strasberg and May Reis, Ralph set out his honest account of Marilyn Monroe’s last years.

This book is Ralph’s chronicle of his time with Marilyn Monroe from 1959 until her untimely death in 1962. Ralph recounts his behind the scenes experiences with Marilyn and her many circles of friends, giving you an inside look at the deeply layered and very busy Marilyn as she prepared for the next phase of her life – a phase that tragically never came. Ralph gives insight into her thinking through good times and bad. He presents an optimistic and talented woman who not only did great things but was poised to do so much more. Ralph attempts to provide clues as to why events happened as they did, not just for the reader but as a means of coping with the untimely loss of his dear friend Marilyn. 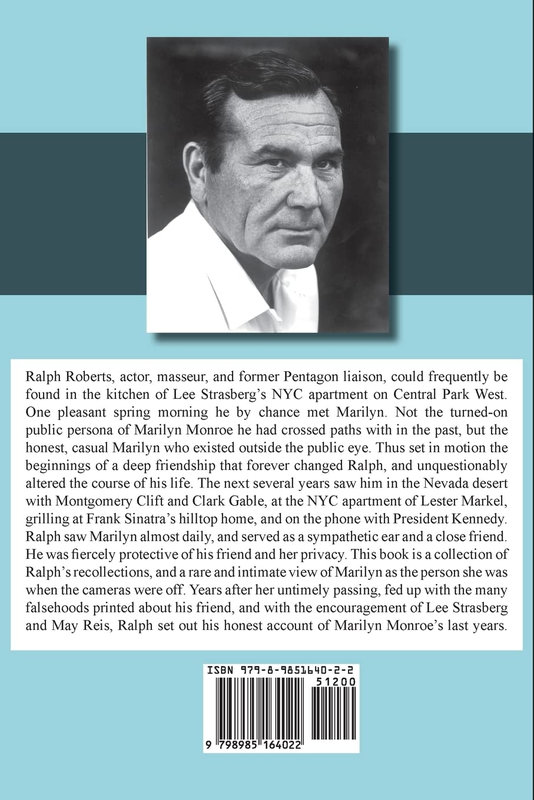