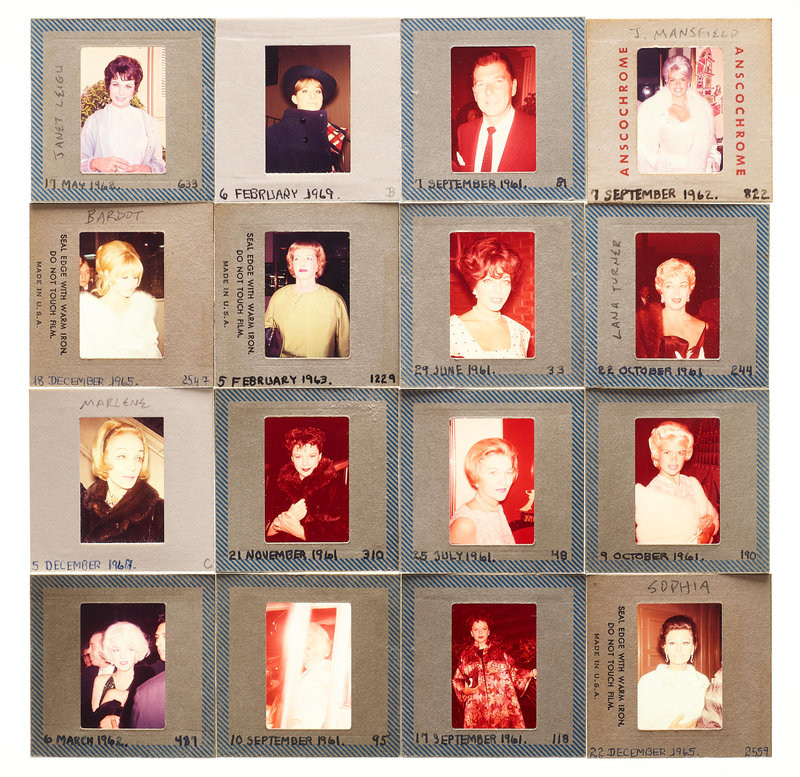 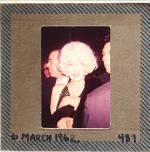 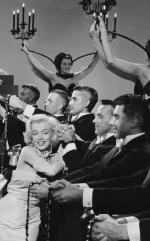 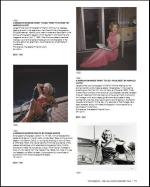 Lot 1249: A Marilyn Monroe group of unpublished transparencies and negatives
from 1946 by photographer Paul Parry, sold with copyright
auction: US$ 15,000 - 20,000 / € 14,000 - 18,000
A Marilyn Monroe group of unpublished transparencies and negatives from 1946 by photographer Paul Parry, sold with copyright
Seventeen different vintage color transparencies and black-and-white negatives comprising 3 color 5 x 7 in. and 5 color 4 x 5 in. transparencies and 5 black-and-white 5 x 7 in. and 4 black-and-white 4 x 5 in. negatives, of Norma Jeane Dougherty (née Marilyn Monroe) wearing a cowgirl outfit and a tennis outfit, all in glassine sleeves, some with "Paul Parry" printed stickers and identifying numbers. Please note that the black-and-white negatives are shown as positives for the catalog.
When Norma Jeane Dougherty began modeling in 1945 after being discovered working at Radioplane Company, local photographers could not get enough of her. Before long, she was appearing in advertisements and on magazine covers. In the advancing years after she became Marilyn Monroe and to this day, well-known photographers such as Bruno Bernard, Joseph Jasgur, and Andre de Dienes published the many photos they took of Norma Jeane during her modeling days, but Paul Parry's photographs remained elusive until now; in fact, only one advertisement–for Mission orange drink–contains his photo credit, the advertisement for which some of the photos from this lot were taken but were used later when she was Marilyn Monroe. In his photos of Norma Jeane with a tennis racket, Monroe fans will immediately recognize the white short overalls that she wore both in her personal life and in many of her early modeling sessions with various photographers, evidence of her lack of money at the time. These rare, never-before-seen images are offered here for the first time, with copyright. Accompanied by the original Mission orange drink ad (in rough shape), an original "Paul Parry" 5 x 7 in. monogrammed envelope with "Marilyn Monroe" typed to center, an original 4.5 x 6.5 in. paper file tab with "Norma Jean Dougherty" handwritten in pencil to top, and an original 1940s pamphlet promoting Paul Parry's photography business. 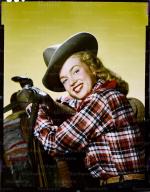 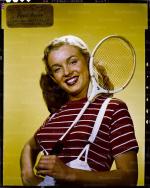 Lot 1250: A Marilyn Monroe signed photographer's release from her early modeling days
auction: US$ 3,000 - 5,000 / € 2,700 - 4,600
Photographer's release document signed ("Norma Jeane Dougherty") to lower right, dated April 25, 1946, on "Paul Parry / Photographer" letterhead, indicating that Monroe is receiving $15.00 for her modeling work and waives all rights to the photographs. The client name, "Evers Whyte," is handwritten to upper left corner, and Parry's letterhead address is crossed out and his Sunset Blvd. address typed underneath. In 1946, Monroe was in the middle of divorcing her first husband Jim Dougherty, to whom she had been married for 4 years, and was working diligently to further her modeling career. According to Emmeline Snively, who put her under contract to the Blue Book Modeling Agency, "She was a clean, shining, pleasant, expressive-faced little girl, the girl-next-door type." 5.5 x 8.5 in. Lot 1251: A Marilyn Monroe signed invoice to photographer Paul Parry from her early modeling days
auction: US$ 3,000 - 5,000 / € 2,700 - 4,600
Model's paper invoice signed ("Norma Jeane Dougherty") at bottom, dated April 25, 1946, indicating that photographer Paul Parry is to be billed $15.00 for Norma Jeane's modeling work on a job for Buffums' department store. In late 1945, Monroe signed a contract with Emmeline Snively's Blue Book Modeling Agency and by early 1946 was also posing for pinup painter Earl Moran; this April 1946 invoice with Paul Parry indicates it was one of her earliest modeling jobs. She quickly became one of Blue Book's most requested models because of her fresh-faced naturalness in front of the camera. 3.25 x 5 in.

Lot 1252: A Marilyn Monroe print titled "Pretty in Pink" by Harold Lloyd
auction: US$ 600 - 800 / € 550 - 730
Large-format color photograph of Marilyn Monroe in a negligee, reading a book in her apartment. As a friend of the photographer Philippe Halsman, Harold Lloyd was a witness and participant in the famous photographic session which resulted in Monroe's first Life magazine cover of April 7, 1952. After Monroe made a wardrobe change, Lloyd shot a series of sensual color photographs of her lounging about her apartment. Accompanied by a Certificate of Authenticity.
Provenance: the estate of Harold Lloyd. 24 x 25 in. Lot 1253: A Marilyn Monroe print titled "Poolside" by Harold Lloyd
auction: US$ 600 - 800 / € 550 - 730
Large-format color photograph of Marilyn Monroe relaxing by the pool at Harold Lloyd's massive estate, "Greenacres," while wearing a bathing suit from her film, How to Marry a Millionaire (1953). What looked like an ordinary photo shoot at Lloyd's estate was later revealed to be an instance of Monroe helping out the government by shooting film footage which encouraged government employees to keep confidential what they knew about atomic bomb testing in the Pacific, Nevada, and Mexico. To this day, only seconds of that footage have been revealed, along with these photographs. Accompanied by a Certificate of Authenticity.
Provenance: the estate of Harold Lloyd. 24 x 25 in. Lot 1254: A Marilyn Monroe photo by Frank Worth
auction: US$ 600 - 800 / € 550 - 730
Silver gelatin photograph, edition no. 14/195, with photographer's estate blind stamp in margin recto, printed later. Taken during a photo session with Sammy Davis, Jr. during the shooting of How to Marry a Millionaire (1953), this natural candid of Monroe is evidence of the relaxed atmosphere which attended photographer Frank Worth's shoots and made his pictures so unique. Worth had an impressive body of work dating from the 1930s to the 1960s, but most of it was not released until after his death. Accompanied by a certificate of authenticity from the photographer's estate. 16 x 20 in.

Lot 1255: A Marilyn Monroe photo by Frank Worth
auction: US$ 600 - 800 / € 550 - 730
CBS, 1953. Silver gelatin photograph, edition no. 14/195, with photographer's estate blind stamp in margin recto, printed later. Monroe relaxes on the set of The Jack Benny Show where she made her television debut in 1953. She engaged in a comedic skit with Benny and also serenaded him with a rendition of "Bye Bye Baby," a song from her hit film, Gentlemen Prefer Blondes (1953). Accompanied by a certificate of authenticity from the photographer's estate.
16 x 20 in. 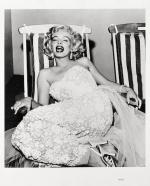 Lot 1256: A Marilyn Monroe oversized print by John Bryson
auction: US$ 1,000 - 1,500 / € 910 - 1,400
Silver gelatin photograph wrapped around masonite board, signed ("John Bryson") to lower right and signed ("Bryson") to reverse margin. Monroe is depicted in her element as her entourage, including makeup artist Allan "Whitey" Snyder and hair stylist Sydney Guilaroff, attends to her every need. Taken on the set of Let's Make Love (1960), Bryson was able to capture the chaotic atmosphere that often accompanied Monroe when making films. John Bryson gifted this print to the consignor's grandfather, who was an amateur photographer and friend of Bryson.
30 x 40 x 0.5 in. Lot 1257: A Marilyn Monroe and Arthur Miller oversized print by John Bryson
auction: US$ 1,000 - 1,500 / € 910 - 1,400
Silver gelatin photograph wrapped around masonite board, signed ("John Bryson") to lower right and signed ("Bryson") to reverse margin. Taken on the set of Let's Make Love (1960), Monroe is without makeup and glowing as she is toweled off by husband and playwright, Arthur Miller. The happy shot chronicles the calm before the storm; Monroe would engage in an affair with her co-star, Yves Montand, during filming and effectively doom her marriage. John Bryson gifted this print to the consignor's grandfather, who was an amateur photographer and friend of Bryson. 30 x 40 x 0.5 in. 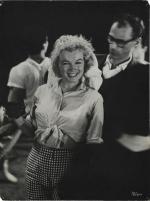