Lot 886: MARILYN MONROE BEHIND-THE-SCENES PHOTOGRAPHS
A group of six photographs of Marilyn Monroe and others on the set of Let's Make Love (20th Century, 1960). Includes images from Monroe's on-set birthday party where director George Cukor and co-star Yves Montand can also be seen.
PROVENANCE From the lost archive of Marilyn Monroe
8 by 10 inches
Winning bid:$625 - Estimate: $1,000 - $2,000 Lot 888: MARILYN MONROE CHRISTMAS DRAWING FROM YVES MONTAND AND SIMONE SIGNORET
A Christmas greeting received by Marilyn Monroe from Yves Montand and Simone Signoret circa 1959. Created on Beverly Hills Hotel stationery in blue ink. The central image is of a man on stage below the text "Happy/ Christmas!!" Signed on the left "Yves" and on the right "Simone."
PROVENANCE From the Collection of Lois Banner
and Partial Lot 816, "Julien's Summer Sale," Julien's Auctions, Las Vegas, June 26, 2009
6 3/4 by 5 1/4 inches
Winning bid:$1,280 - Estimate: $300 - $500 In January and February 1960, the two couples Marilyn Monroe - Arthur Miller and Yves Montand - Simone Signoret live at the Beverly Hills Hotel (in Beverly Hills) during the filming of "Let's Make Love". They have used to dinner together every evening. They are photographed one evening by Bruce Davidson, at a dinner in the Montand's bungalow n°22 Montand (the one of Marilyn and Miller is No. 21). 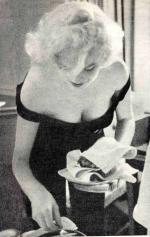 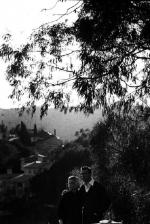 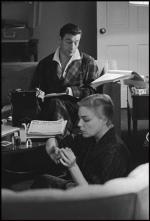 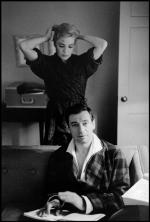