Lot 945: MARILYN MONROE SIGNED GLOVE
A white glove signed by Marilyn Monroe. The glove is signed on the back in blue ink. Housed in a framed display with five images of Monroe. Not examined outside of frame.
Winning bid:$16,250 - Estimate: $10,000 - $12,000

Lot 1010: MARILYN MONROE BRASSIERE CUP LINERS
A pair of Marilyn Monroe bra cup liners from her professional wardrobe. The first is a crème satin liner, the other is black lace. A Christie's lot tag is pinned to one of the garments, as they were originally intended to be sold in Christie's 1999 Monroe estate auction. No sizes present.
PROVENANCE Lot 79, "Property from the Estate of Marilyn Monroe," Julien's, Los Angeles, June 4, 2005
Winning bid:$10,625 - Estimate: $800 - $1,200 Lot 1014: MARILYN MONROE SILK UNDERSKIRT
A black silk underskirt from the estate of Marilyn Monroe. The skirt has a waistband with hook and eye closures and a label that reads "Polly's 480 Park New York Evelyn Byrnes, Inc." The skirt slightly balloons at hips to the slender-fitting satin band at mid-thigh.
PROVENANCE Partial lot 104, "Property from the Estate of Marilyn Monroe," Julien's, Los Angeles, June 4, 2005
unsold - Estimate: $6,000 - $8,000 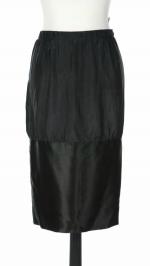 Lot 1032: MARILYN MONROE SOMETHING'S GOT TO GIVE DRESS
A Marilyn Monroe worn dress from her final film, Something's Got to Give (20th Century Fox, 1962). The figure-hugging silk crepe dress is printed with scattered painterly roses in shades of persimmon and deep cherry with a plunging V back. The interior of the studio constructed dress has hand finished details, is lined with ivory souffle, and has boning to the waistline. Jean Louis was the costume designer on the film. Monroe wore this dress when her character, who was proclaimed dead and returns from being stranded on an island for five years, is introduced in the film and reunited with her children, who do not realize she is their mother. Monroe was fired from the film, and while the studio tried to replace her with Lee Remick, the film's leading man, Dean Martin, refused to finish the film without Monroe. Monroe's untimely death came less than a month after she was let go from the production.
In 1989, raw footage of the uncompleted movie was discovered in 20th Century Fox’s film vault by the producers of Fox Entertainment News, who edited 37 minutes of the film, featured in the FEN documentary Marilyn: Something’s Got to Give (Fox Network, 1990). The edited footage was later re-purposed in AMC’s 2001 documentary Marilyn Monroe: The Final Days (Prometheus Entertainment), which aired on what would have been Monroe’s 75th birthday.
Winning bid:$358,000 - Estimate: $300,000 - $500,000 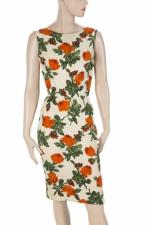 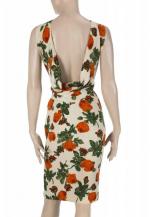 Lot 930  MARILYN MONROE 1953 GOLDEN DREAMS CALENDAR
A 1953 Marilyn Monroe Golden Dreams calendar. The lithograph image of Monroe, which reads "Golden Dreams" and "Made in U.S.A.," is affixed to wood grain paper where "Marilyn Monroe" has been printed and the 1953 calendar is stapled. The calendar was made by Wholesale Calendar Company out of New Albany, Indiana. The calendar has been mounted into a matte.
PROVENANCE From the Estate of Marvin Paige
Winning bid:$375 - Estimate: $400 - $600 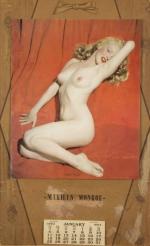 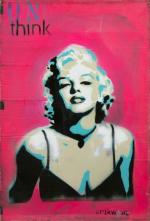 Lot 959: MARILYN MONROE SIDE VIEW X-RAY
An X-ray of Marilyn Monroe from a side view. Printed on the X-ray is the following information: "Cedars of Lebanon Hospital/Drs. E. Freedman and S. Finck/ Name Di Maggio Marilyn/ No. 50612 Date 11-10-54/ Ref. By Dr. L. Krohn."  While a radiology resident at Cedars, a young doctor obtained these X-rays. When he taught at the school himself, he used these X-rays to ensure that students were paying attention. Monroe was said to have known about the X-rays and their use, about which she said, "Isn't that sweet." Monroe's hospital visit was said to be for her chronic endometriosis, or as her doctors described it, "For correction of a female disorder she has suffered for years."
17 by 13 3/4 inches
PROVENANCE Lot 818, "Hollywood Legends," Julien's Auctions, Las Vegas, June 26-27, 2010
Winning bid:$12,500 - Estimate: $8,000 - $10,000 Lot 1004: MARILYN MONROE JASPERWARE TRINKET BOX
A Wedgwood Jasperware lidded trinket box owned by Marilyn Monroe. The lilac colored box (referred to as mauve colored in the 1999 Christie's catalog) features a classical allegorical image on the lid with rosettes and other raised foliate embellishments. The underside of the rectangular-shaped box is impressed "Wedgwood/ Made in/ England" and the number "9." Also affixed to the box is a Christie's lot tag and barcode.
3 1/2 by 1 3/4 by 1 1/4 inches
PROVENANCE Partial Lot 461, "The Personal Property of Marilyn Monroe," Christie's, New York, Sale number 9216, October 27 & 28, 1999
Winning bid:$4,062.50 - Estimate: $800 - $1,200 Lot 1040: MARILYN MONROE GRAVE MARKER
Marilyn Monroe’s former grave marker from Westwood Village Memorial Park Cemetery in Los Angeles, California. Made by the Gasser-Olds bronze casting company, this marker was removed in the 1970s and replaced with a new grave marker. The marker reads simply “MARILYN MONROE/ 1926 – 1962.” Monroe’s grave site became a destination for Monroe’s fans and the constant touching of the marker led to wear and damage. When the marker was replaced the old marker was returned to Gasser-Olds and was given to an employee of the company.
4 1/2 by 15 inches
Winning bid:$212,500  - Estimate: $2,000 - $4,000