lot n°762: Warner Brothers Large bronze key ca. 1950"s,
a symbolic key to the studio 11 inches x 4 inches
A tradition existed for some years at Warner Bros. Studio of welcoming dignitary and celebrity guests (like major stars on loan from other studios) with one of these commemorative “keys to the studio” in a publicity event for the benefit of promoting Warner’s largesse and standing in the industry. One such key was presented to Marilyn Monroe by Jack Warner when she filmed The Prince and the Showgirl with them, and that key was sold at her estate auction by Christie’s in 1999 for $32,200. Polished cast bronze, 11 in. x 4 in. and weighing 12.2oz.
Estimate: $2 000 - $3 000 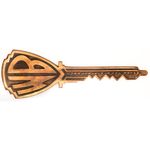 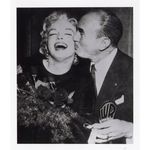